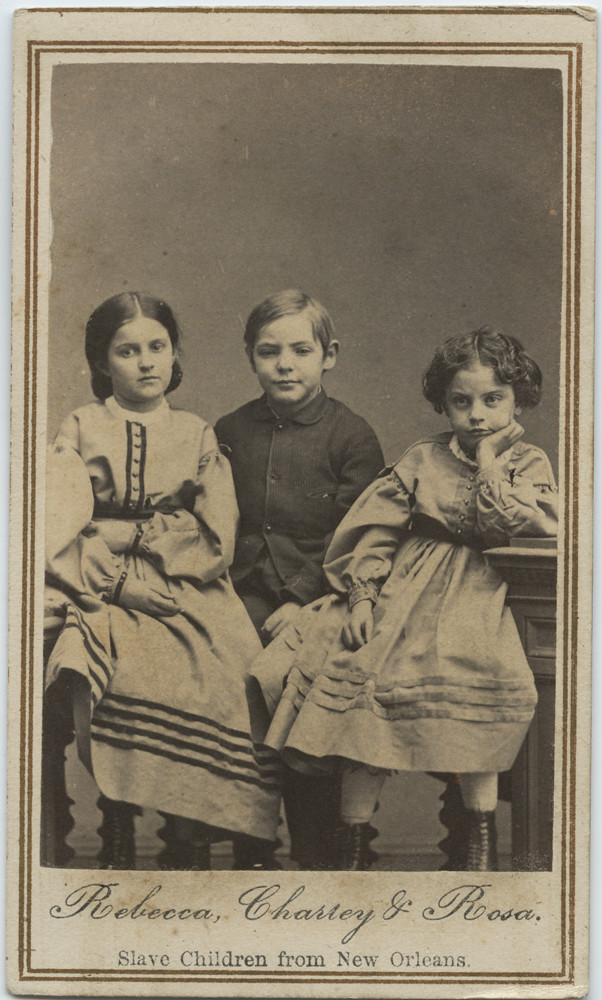 I find this story… one I’ve been following for a bit, disturbing.

It’s the story of three children who were used by the anti-slavery movement in the North of the United states to shock the Yankees into the realities of slavery.

The idea was if the readers of the magazine/newspaper saw these ‘white-looking’ children, they would begin to sympathise with the overall cause to end slavery. Everything I’ve been reading, seems to caricature these children as opposed to making them ‘real’. Their usage by the media to forward the case was based on these photographs, but doesn’t invest the images with much character or backstory, or for that matter follow up.

Here are three children orphaned and separated from their families, and we have little idea of their lives before or after these sequences of photographs were made.

It’s as though they continue to remain voiceless and without personality, without anima. Like dolls, posed, dressed and presented for unrealistic tea.

I did find one piece of writing on “Mirror of Race” entitled: “As White As Their Masters”: Visualizing the Color Line by Carol Goodman, which does what it can to explore these children and the implications of their promotion as anti-slavery propaganda etc., yet of course it too is limited. What happened to them? How did they come to be under the guardianship of abolitionists?

MUST READ:   VIDEO: Who Is Saartjie Baartman?

However, Goodman echoes my thoughts at the end of her essay:

Although they made numerous public appearances, very little is known about the New Orleans slave children and Fanny Lawrence. Where did they come from? Who were their parents? The abolitionists it seems were more interested in what these “all-but-white” slaves represented than they were in the children themselves. They were living proof that generations of miscegenation had indeed produced a significant number of slaves who were every bit “as white as their masters” and every bit as enslaved as their mothers.