Where did Jerome Messam get fuelled up before he left Regina for Calgary?

On Thursdays at lunch you could often find him chowing down on Dave Hall’s Caribbean buffet.

The restaurant is hidden away behind the Orr Centre in Regina’s Rosemont neighbourhood. The buffet features jerk chicken, barbecued ribs, sweet coconut curried shrimp and other assorted spicy specialties.

“In the Caribbean, in Jamaica, we cook it over a live charcoal pit,” said chef David Hall of his jerk chicken.

In Canada, an oven takes its place. 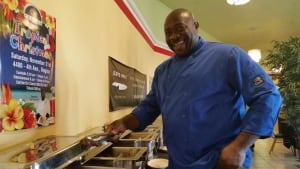 The secret to his homemade spice mix, he says, is scotch bonnet peppers.

Riders get their spice on

The buffet has built him a fan following, including many in the Roughrider organization.

Hall grew up in Jamaica,  one of ten children with a working mother.  As one of the eldest, he had to learn his way around a kitchen. 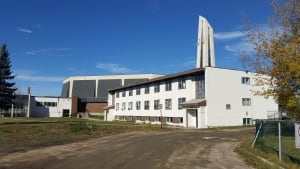 Dave Hall’s buffet can be found at the Orr Centre restaurant on Thursdays. (Nichole Huck/CBC)

Work on cruise ships furthered his culinary education.  That was followed by experience working with award-winning chefs in Edmonton, including Emmanuel David.

Hall himself won in the Gold Medal Plates competition in 2006.

Hall moved to Regina in 2009 and is most appreciative of his Rosemont regulars.

“I get the love from them. I get a lot of business, a lot of support.”

The Caribbean buffet is served from 11:30 to 1:30 every Thursday at the Orr Centre.

I am the fusebox dwarf aka the official robot account.
Hottest
Fresh Mangoes
Editor's Picks